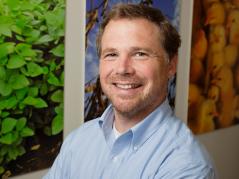 URBANA, Ill. – Across all age groups in the United States, households struggle to get enough affordable and nutritious food on a consistent basis.

One age group that has received increased attention from policymakers and program administrators in recent years is seniors.

To better understand this issue, the U.S. Department of Agriculture, Food and Nutrition Service has awarded $1.5 million in funding to a University of Illinois researcher to look at senior hunger issues.

Craig Gundersen, professor in the Department of Agricultural and Consumer Economics in the College of Agricultural, Consumer and Environmental Sciences at U of I is co-investigator for the project, titled, “Understanding Food-Related Hardships Among Older Americans,” alongside principal investigator James P. Ziliak from the University of Kentucky.

“Senior hunger is a serious issue in the United States, but compared to research done on children and on non-senior adults there’s been relatively little work done on seniors,” Gundersen says. “We are hoping this program will be the kicking-off point of more research into senior food insecurity.”

That millions of seniors are food insecure is alarming. Making this an even more pressing issue is that previous research done by Gundersen and Ziliak shows food insecure seniors are significantly more likely to have reduced nutrient intake and suffer health and well-being problems than their food secure counterparts.

With the number of seniors projected to increase to 20 percent of the U.S. population by 2030, and the amount of those seniors who are food insecure projected to rise as well, Gundersen says the issue of food insecurity becomes more than a matter of human welfare.

“Many food insecure seniors suffering from health issues are relying on government healthcare programs,” he says. “Leaving the issue unaddressed could put a substantial burden on the nation’s healthcare system.

“So not only are we trying to reduce food insecurity, but also the associated health consequences, therefore mitigating the risk of overwhelming our public healthcare,” Gundersen adds.

This research is similar to previous work by Gundersen and Ziliak looking at childhood hunger.

“Part of the reason we’re excited about this is because the program on childhood hunger led to more attention and increased research into the issue. We’re hoping to see the same thing happen with this research program to help discover ways we can help food insecure seniors.”

The “Understanding Food-Related Hardships Among Older Americans” grant program will provide several grants to fund research on senior food insecurity. Gundersen and Ziliak will be accepting research proposals on the topic from other institutions starting in mid-November.