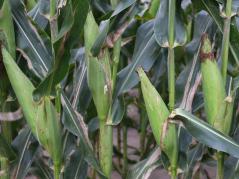 URBANA, Ill. – When corn prices increase farmers reap higher yields by making changes. According to a recent University of Illinois study, about one-third of the yield increase derives from more intensive management practices and two-thirds from cropping additional acreage. Agricultural economist Madhu Khanna says the findings dampen the ongoing debate about the food price and land use changes due to corn ethanol.

“There has been a lot of controversy about the impact of biofuel production and corn ethanol production on corn prices because it affects the estimates of the indirect land-use change caused by corn ethanol,” Khanna said. “This in turn affects the carbon-intensity calculations for corn ethanol used to estimate how corn ethanol can comply with the Low-Carbon Fuel Standard in California which seeks to reduce the greenhouse gas intensity of transportation fuel in California by 10 percent by 2020. From this research, knowing that corn yields are responsive to corn prices lowers the magnitude of land-use change related to carbon-intensity of corn ethanol.”

The study drew from 30 years of data (1977 to 2007) from the National Agricultural Statistical Service (NASS) of the USDA on county-level corn and soybean yield and acreage in the rain-fed region of the United States—east of the Great Plains. The study also looked at climate variables, both for the 30-year period and in predictions for what temperature and precipitation will be in the years 2040 to 2050 and in the longer range to 2080.

“We also find that, by including the potential for prices to impact corn yields, it actually reduces the adverse impact on corn yields that can be attributed to climate variables,” Khanna said. Previous studies show climate change leading to a much larger reduction in yields in the long run. “When you take into account that there is adaptation and farmers can change their practices in response to prices, we find those estimates to be about 10 percent higher than what they would be without farmers’ responsiveness.”

Khanna says it’s important not to attribute all of the change that might occur in response to climate change to climate variables alone, but to recognize the potential for adaptation while trying to understand what the future might look like under climate change.

“We know from this study that higher crop prices will lead farmers to invest more and improve production on their existing land,” Khanna said. “And although we cannot disaggregate and specify what the changes were that led to increases in yield, we do find a statistically significant relationship between higher corn prices and higher yield per acre. And we don’t find the same results in the case of soybeans.  Based on some of our other research, we know that when a farmer expands corn production, the expansion is onto soybean land and soybean moves onto more marginal land. That’s why we see more of that price increase.”

In examining growing degree days, the study found, as expected, that having a longer growing season and warmer weather is beneficial to a crop, but as it creeps closer to threshold levels, more warming can actually have a negative effect. Khanna said it has a U-shaped effect on crop yields.

“We also find clear evidence that having a large number of days above the threshold has a significant adverse impact on crop yields,” Khanna said. “Compared to temperature, precipitation changes have a smaller impact – but also a U-shaped effect where, up to a point, precipitation is good, but too much rain can have a negative impact on crop yields. In general, the study found that south and southeast regions will have a much more negative impact from climate change than the upper Midwest.

“Our findings provide evidence of the potential for adaptation because farmers can be expected to respond to higher crop prices that may accompany climate change,” Khanna said. “Consequently, the net impact of climate change may not be as negative because farmers are going to be able to use better practices in order to compensate to some extent.”

Khanna stressed that any assessment of the land-use effect of corn ethanol should consider what this study learned about the responsiveness of corn yield to prices. It is particularly important because the estimate of the indirect land-use change caused by higher corn prices due to corn ethanol uses global equilibrium models and the responsiveness of corn yields to corn prices is an important parameter in those models. The results of this study can help guide the discussion about models which estimate the carbon footprint of corn ethanol.

“Responsiveness of crop yield and acreage to prices and climate” was written by Ruiqing Miao, Madhu Khanna, and Haixiao Huang and published in the American Journal of Agricultural Economics. Funding was provided by the Energy Biosciences Institute, University of California, Berkeley. Khanna is the ACES Distinguished Professor for Environmental Economics in the Department of Agricultural and Consumer Economics in the College of Agricultural, Consumer and Environmental Sciences at the University of Illinois.