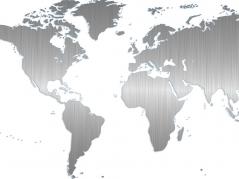 URBANA, Ill. – For scientists, estimating the extent of and cost of damages from climate change over the next 100 years is a challenging task. A primary challenge is developing forecasts of long-run economic growth, which is highly uncertain and directly affects projections of greenhouse gas emissions concentrations in major climate models.

Through this effect on emissions, uncertainty in long-run economic growth adds considerable uncertainty to projections of future temperatures and precipitation, glacier retreat, sea level rise, increased frequency and intensity of storms, and droughts.

In a new study published in the Proceedings of the National Academy of Science, researchers from the University of Illinois and Yale University present a systematic method of integrating current models to develop forecasts of uncertainty in global and regional per capita economic growth rates through the year 2100.

Peter Christensen, assistant professor in the U of I Department of Agricultural and Consumer Economics, along with Yale University colleagues, Kenneth Gillingham and William Nordhaus, compare estimates from a panel of expert economists and use a statistical approach designed to analyze long-run trends and variability. The researchers found substantially higher uncertainty than is assumed in current studies of climate change impacts, damages, and adaptation.

They report a median growth rate in per capita output of approximately 2.03 percent per year between 2010-2100, with a standard deviation of 1.1 percentage points per year. The estimates from both of these methods suggest a substantial upward revision in the current understanding of uncertainty in economic growth trends during the 21st century. Regulatory decisions involving long-run horizons such as global climate change and U.S. social insurance programs (i.e. Social Security, Medicare) depend critically on estimates of economic growth. This new understanding of uncertainty will affect policy planning in the United States and around the world.

“You can imagine when trying to develop comprehensive estimates of global climate change impacts in 2100, the uncertainties in each of the underlying models used as inputs into that final exercise must be integrated. This is a major scientific challenge in 2018,” explains Christensen. “Our team engaged several major modeling teams around the world to develop a method for incorporating these uncertainties. Future damages are highly sensitive to growth rates because they drive uncertainty in emissions concentrations.

“The scientific community has been underestimating uncertainty in the primary factor [long-run economic growth] that drives greenhouse gas emissions.”

Results from the study suggest more than a 35 percent probability that emissions concentrations will exceed those assumed in even the most severe of available climate change scenarios because of the larger range of growth rates. “The implication is that if we are producing more and consuming more, we must assume that emission rates will grow significantly faster than we thought,” Christensen says. “In the absence of meaningful climate policy, higher baseline growth scenarios likely imply higher emissions growth around the world. The level of uncertainty revealed by this study will shift our modeling of physical and social processes related to changes in the climate and the baseline for policymaking.”

Gillingham, co-author of the paper and professor of economics at the Yale School of Forestry and Environmental Studies, explains that the findings, “illustrate the importance of paying close attention to the highest economic growth scenarios. Such high growth outcomes would be good for the world in many ways, but they have worrisome environmental implications if we don’t see real effort by policymakers.”

Future growth of the U.S. and world economies over this century may be considered one of the most pressing questions for many policy issues, from climate change to social security. Nordhaus, the Sterling Professor of Economics at Yale, adds, “This study is the first to address this issue using both expert surveys and econometric techniques. It concludes that prospects are good, but uncertainties are much greater than people realize."

The paper, “Uncertainty in forecasts of long-run economic growth,” is published in the Proceedings of the National Academy of Sciences. [DOI: 10.1073/pnas.1713628115] Co-authors include Peter Christensen, of U of I; Kenneth Gillingham, of Yale University; and William Nordhaus, of Yale University.

This work was partly supported by the Carnegie Commission of New York (Nordhaus), the Department of Energy (all authors), and the U.S. National Science Foundation through the Network for Sustainable Climate Risk Management (SCRiM) under NSF cooperative agreement GEO-1240507 (all authors).