The long-standing partnership between the University of Illinois at Urbana-Champaign and Njala University in Sierra Leone offers students and faculty the opportunity to participate in research projects and cultural exchange through long or short term courses. Students interested in international development, agricultural development, agribusiness, or global health and nutrition are encouraged to look into the different programs this partnership has made possible. 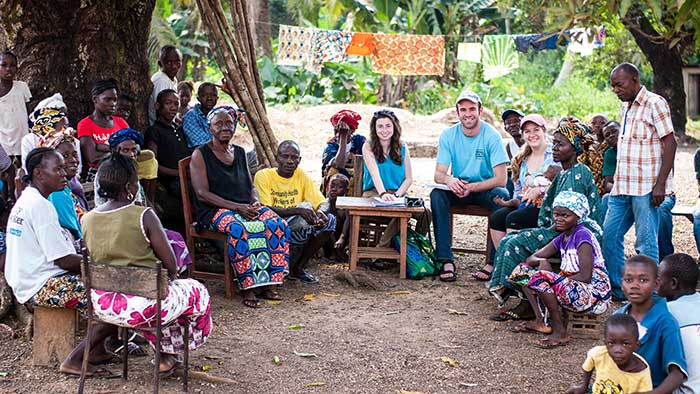 There are three main programs available to students at the University of Illinois and other US institutions. Each shares a common theme of ensuring students get hands-on experience addressing important topics and authentic engagement with the Sierra Leonean culture.

This spring semester program puts emphasis on collaboration with Njala students and service learning experiences. While in Sierra Leone, students take courses taught in English which focus on agribusiness management, international trade, and development. As part of the program, students also gain internship experience working with a commercial agribusiness, an agribusiness related non-governmental organization, or a farmer cooperative. To learn more about this opportunity, see the program brochure on the Illinois Abroad & Global Exchange website or see this video.

During this semester long, immersive program students take courses focused on public health and development in West Africa before interning with a health clinic, nutrition related non-governmental organization, or an environmental research lab. This is an ideal program for students looking to learn about the social and economic realities of communities working to improve public health, nutrition, and water sanitation. For more details, view the program brochure.

This is a winter study tour offered as a 400 level class through the department of ACE. Working in conjunction with students from Njala University, U of I participants conduct a service project and gain first-hand experience in policy and management, focused on agriculture and the environment. The two week tour wraps up with a short-course where research is presented that covers agriculture, environment and governance in the context of development in Sierra Leone. To see if this study tour is a good fit for you, see the program brochure or watch this video.

For more information on any of the Sierra Leone programs contact Paul McNamara at mcnamara1@illinois.edu or find Illinois in Sierra Leone on Facebook.

See and Hear From Student Experiences

To help get feel for what it is like to live, work, and study in Sierra Leone as part of these programs, experiences of previous students have been documented and compiled into a blog.

Dr. Richard Cooke, Associate Professor and drainage extension specialist in the Department of Agricultural and Biological Engineering, spent fall semester 2013 at Njala University in Sierra Leone designing rainfall harvesting systems to increase agricultural productivity in the country’s inland valley swamps. During a sabbatical leave based at Njala, Cooke initiated a study to investigate the extent to which rainwater harvesting (RWH) can impact the area’s surface water and groundwater throughout the year.  RWH is a method of inducing, collecting, storing, and conserving local surface runoff for agricultural production which can promote small-scale, cost-effective irrigation. Cooke worked primarily with Njala’s Professor Rashid Noah, and two PhD students he is supervising, Mr. Mohammad Blango and Mr. Patrick Sawyerr.

History of Njala and Illinois

In 1963, the government of Sierra Leone and the United States Agency for International Development (USAID) assessed the needs of Sierra Leone in agriculture and education. On the basis of their recommendations, the government established Njala University College in the mold of an American Land Grant University. Technical assistance was provided by USAID, with the University of Illinois as the implementing partner. Faculty from the College of ACES taught at Njala during its formative years and several graduates of Njala came to Urbana-Champaign to pursue graduate degrees.

Njala University was displaced from its rural location in 1994 when many of its facilities were destroyed during the Sierra Leonean civil war. As a result, faculty and students set up in Freetown, and Njala University was officially deemed an independent university in 2005. In recent years, the university has made great strides in rebuilding and expanding its main campus in Moyamba District.

The University of Illinois and Njala University currently host a number of joint activities through their academic partnership. These include workshops, seminars and training focused on nutrition, food security, food processing, agribusiness and sustainability. This partnership between the University of Illinois and Njala University creates many opportunities for students, faculty and staff to collaborate with one another through study abroad programs or research projects carried out in Sierra Leone.